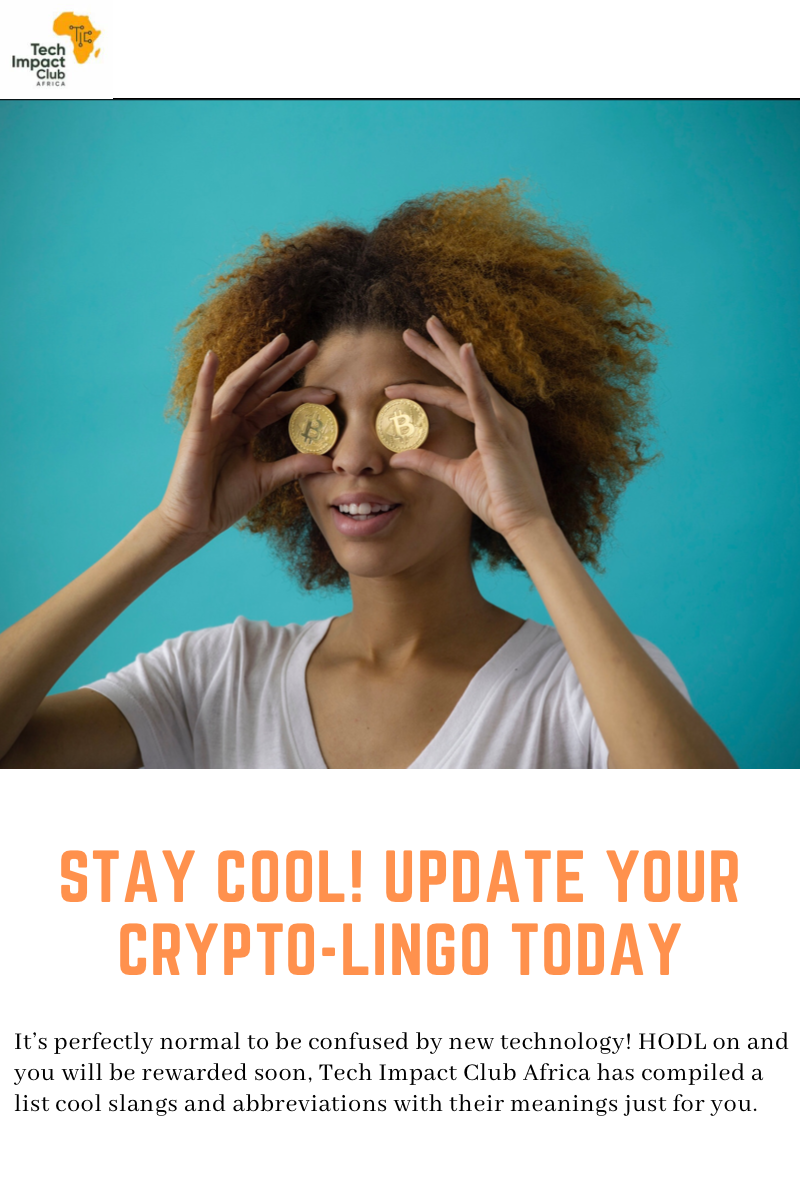 A bitcoin (symbol ฿) is a decentralized cryptographic currency, meaning it is very difficult to counterfeit and is not issued by any government or central bank. Bitcoin is a cryptocurrency and worldwide payment system.

This is very likely not the first time you are hearing about the Bitcoin or cryptocurrencies generally, you probably even know a few things from the tidbits you read on Twitter and in the news but if you are like most people, there are just too many words flying about and it’s hard to keep up.

It’s a common misconception to think you are not familiar with all the new terminology. It’s perfectly normal to be confused by new technology! HODL on and you will be rewarded soon, Tech Impact Club Africa has compiled a list of cool slangs and abbreviations with their meanings just for you.

“HODL.” (noun) a misspelling of the word “hold,” used in forums and chatrooms with the intention of helping people remember to hold onto their cryptocurrency investments. It has evolved into a full-fledged Internet meme that has now taken on its own meaning.

HODLER is a play on the word hodl, which is an intentional misspelling of the word hold that has become an internet meme. HODL originated in an early bitcoin forum and means ‘hold’ or ‘hold on for dear life’ when referring to holding one’s bitcoins rather than selling them in periods of volatility.

The smallest unit of bitcoin is called a satoshi. i.e. 0.00000001 of a bitcoin. The term Satoshi is named after the creator of Bitcoin, which was Satoshi Nakamoto.

A whale is an individual who owns a significant amount of cryptocurrency and has the ability to influence prices.

A whale is someone with a big investment in a particular cryptocurrency. These are people who have a lot to lose so they can greatly influence the value of the currency. With more coins circulating, their power increases.

This means that if a ‘whale’ sells a lot of their stake, it can cause the price of a cryptocurrency to dip by flooding supply.

Pump and dump means buy the coin, create the demand in the market, the coin will go up in value. Once they have enough money they will sell all the coins they bought.

To pump and dump is to generate a buying frenzy in the market, then selloff the coins when prices are high.

Cryptocurrency enthusiasts often get excited about minor bumps in price and boast that their coin is headed “to the moon,” a phrase frequently used to suggest that a currency will increase in value by orders of magnitude. However, many investors and analysts have expressed concern in recent months about the lack of analysis behind such claims, pointing out that the high volatility of crypto-assets means that short-term price movements may be less reflective of the asset’s long-term prospects than some enthusiasts acknowledge.

There’s no shortage of hype online over cryptocurrencies, but for the most part, price gains don’t reflect strong fundamentals.

In the cryptocurrency industry, it’s common for people to spread “FUD” (fear, uncertainty and doubt) to manipulate markets. FUDsters are professionals who may work at big companies, or they might be anonymous trolls who spread FUD on a normal basis. Don’t let the FUD on twitter or other media distract you. The best way to avoid the Bitcoin and cryptocurrency FUD is to do your own research.

And on this note we would like to remind you that this principle applies not only to crypto trading but to every aspect of our lives; remember not to succumb to fear, uncertainty and doubt. Arm yourself with knowledge and soar.

Technology and The Evolution of Learning